Learn how natural gas can be processed as a reliable source of hydrogen for fuel cells that generate efficient clean electricity and heat for industry and transportation.

How Do Fuel Cells Work?

A fuel cell is a device that runs hydrogen and oxygen through chemical reactions in a process that generates electricity and heat which can be harnessed and captured for use as energy sources.

On the outside, a fuel cell often looks like a large basic metallic box; on the inside is a series of “cells” arranged in a stack.  Each cell in the stack contains two electrodes: an anode and a cathode, like in a typical battery.

There are different types of fuel cells depending on the composition of the electrolyte, but essentially here’s how they work:

The negatively-charged electrons (e-) are blocked by the electrolyte so they flow from the anode into a metal wire to create a Direct Current (DC) of electricity that is combined with the current generated by the other cells in the stack.  This composited current is carried outside the fuel cell stack to another device called an inverter.  The inverter converts the Direct Current (DC) to conventional Alternating Current (AC) so it can be used for any general electrical purpose.

Meanwhile, the positively-charged protons (H+) are not blocked by the membrane so they move through to the cathode where they meet up with the unused hydrogen electrons (e-) that have returned to the fuel cell after completing the electrical circuit.

In addition to generating electricity at the anode, the chemical reactions process also generates heat at the cathode. In some fuel cells, there is enough heat available in the form of hot air to process through yet another device called a heat exchanger so the heat energy can be utilized for things like water heating, space heating, or even space cooling through the use of an absorption chiller.  This makes the functioning fuel cell even more energy-efficient.

How do you fuel the fuel cell?

While oxygen is plentiful and available in the ordinary air that we breathe, providing a constant supply of hydrogen for the fuel cell is more problematic.  A common solution is to use natural gas as a source of hydrogen because it can affordably and easily be available on-demand and in large enough quantities to sustain ongoing fuel cell operations. 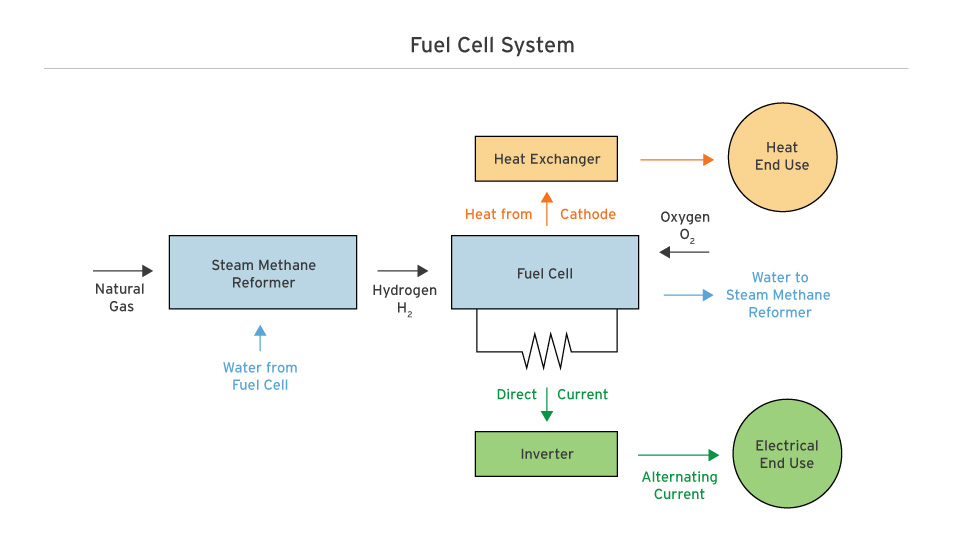 Natural gas is primarily composed of methane (CH4) so the hydrogen needs to be separated from the carbon to be used in the fuel cell.  This separation typically takes place in a device called a steam methane reformer that subjects the natural gas to steam at high temperature and pressure in the presence of a metal catalyst, usually nickel, that facilitates a chemical reaction which produces hydrogen, and small amounts of carbon dioxide and carbon monoxide. The resultant hydrogen is then fed to the fuel cell and the other gases are vented. Water output from the fuel cell can be captured and routed to the reformer, thereby recycling it to be heated into steam for the methane reformation process.

Fuel cells are energy-efficient since they produce electricity chemically rather than through combustion. Depending on the type of fuel cell, efficiency ranges from a low of 40 percent to a high of 80 percent and the electrical output ranges from 200 watts to 2.4 megawatts providing scalable options to meet a variety of commercial needs.

Fuel Cells also have extremely low carbon emissions.  As a result, fuel cells will play in increasingly important role in the effort to achieve greenhouse gas (GHG) emissions reductions world-wide.  Fuel cells have major applications for commerce and industry such as powering and heating buildings as well as fueling buses, fleets and heavy trucks.